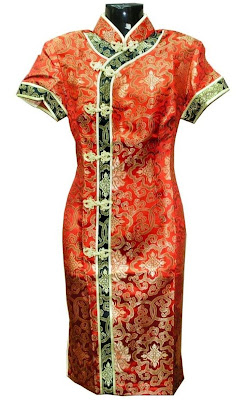 
Many people think of silk as a very pricey fabric offering luxury. This is true. Besides its magnificent beauty and lustrous softness, silk offers other benefits that cannot be matched by synthetic fabrics. These benefits of silk have earned silk its standing as the queen of fabrics. Silk is a material for all weathers, including times when temperatures are high and warm and during the winter. It has natural properties that regulate temperature to enable it to achieve these two things perfectly.

Silk cheongsam will never go out of fashion. For years, it has been the top fabric choice for millions of people. It shines marvelously and has a texture that falls freely thus making it suitable for any shape of the body. In the cheongsam fashion market, the material is on high demand throughout the year. That is why silk cheongsam dresses are pricier compared to cheongsam made with other fabrics. During important occasions such as weddings, evening parties, dates, birthdays and so on, most women go for silk cheongsam to honor the occasion. Of course, each woman would want to look fantastic in an event. Silk cheongsam does not only look attractive on any woman but is also always fashionable. You can never go wrong with a silk cheongsam dress.

You can wear a silk cheongsam in an informal or a formal occasion. For instance, a sleeveless, stylish silk cheongsam dress can be great for daily wear, making you feel confident and charming. Silk cheongsam dresses fit perfectly and enhance your body contours. The material is so light to touch and given proper care, it can lasts for many years without wrinkling. Most chinese brides today go for wedding dresses made of silk cheongsam to make sure they will be the center of attraction at their wedding. Silk cheongsam is also very se*xy and can help a woman look appealing for her mate. 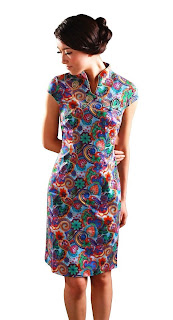 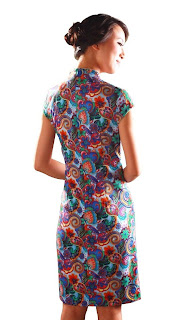 The Origins of the Modern Cheongsam, 1920s presents the modernised cheongsam as worn by the educated elite. The style in the 1920s signifies a period of liberation, with the burgeoning of new ideas and thoughts on the role of women. The cheongsam of the 1920s was loose; the sleeves were wide, and the overall look, simple.

1920 to 1940s saw a stronger sense of modernisation and the embrace of western fashion concepts with narrower and shorter sleeves, the use of imported fabrics such as silk crepe, georgette and chiffon, and the use of geometric, floral and Art Deco motifs. The cheongsam was a popular garb for teachers, wives of wealthy businessmen, young girls, and the Peranakans, as it was associated with modernity.

The Golden Period of Cheongsam in Singapore, 1950s to 1960s represents the evolution of the cheongsam to a popular everyday wear for the working woman, showing a significant shift in the identity of women from a traditional home-maker to the modern working female as a result of the country’s changing political, economic and social climate after World War II.

White Cheongsam
Traditional Chinese dresses are called Cheongsam or qipao and is the traditional Chinese clothing. It was started to be worn during the Ching Dynasty (1644-1911 AD), which was established by the Manchu people who were from Northern China. It is now worn for formal occasions such as weddings, engagements, and on the Chinese New Year. The Ching Dynasty in also spelled Qing Dynasty. Traditionally elements include brocaded cloth, frog knots, and mandarin collars.

White cheongsam is considered a symbol of happiness and purity. When we talk about the wedding occasions, some communities consider it the symbol of virginity. White color is understood pious that remains unaffected with the evils present throughout the world. For the fashion conscious communities, white cheongsam dress is decent and regal choice. We can find in white color dress in the wardrobe of every lady or girl.

White cheongsam dress can be used for almost every occasion irrespective of its time, season and period. During last couple of decades, In China, white cheongsam dresses have become popular as a casual home wear and day to day wear also.

Thank you for reading. 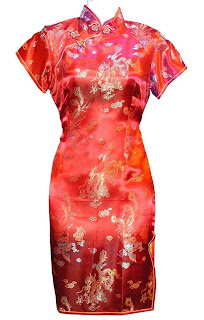 Red Cheongsam
Do you really want to stand out from the rest at the next chinese formal event? If the answer is yes, then wearing a red cheongsam dress may be the way to accomplish this! The color red symbolizes confidence, energy and a certain amount of sexiness. Wearing a bold color like red requires a combination of attitude, finesse and the perfect accessories.

Posted by Unknown at 3:57 AM No comments: 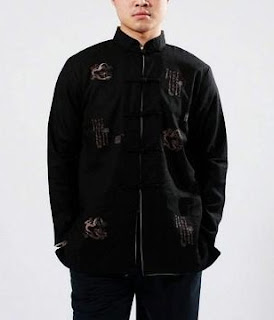 Men's Cheongsam
Men's Cheongsam, the newly found niche in men's fashion has stirred several questions. Does this means the revival of Chinese men's fashion? History shows that traditional Chinese back then wore Han Chinese clothing or hanfu. Then it became cheongsam or qipao. And as the world of fashion became more interconnected and the East meets West theme came about, fashion evolved much more. This piece of clothing proved to be versatile as it transformed plain-looking clothes into trendy and fashionable wear.

Posted by Unknown at 6:26 AM No comments:

Cheongsam Wedding Dress
For a traditional bride who wants an Asian wedding dress it can be a daunting task to find one; you may have to order online and then find a seamstress to finish it to your personal specifications. Here are some interesting facts about the beautiful Asian wedding dresses..

Red is the traditional color of Asian bridal wear, the dresses are made of rich fabrics in bright colors and adorned with ornate embroidery and beading. The dresses are representative of traditional dresses worn by the brides of that culture. The Asian bride usually doesn't wear a veil that covers her face, instead an ornate headpieces is what they most often wear. While each Asian country has their own form of traditional dress and style they do all tend to be ornately detailed and use rich fabrics.

Cheongsam, a Southern Chinese bride, as is custom, wears a bright red dress in China this symbolizes luck. The Cheongsam is a two piece gown. It is embroidered with dragons and a phoenix and typically done for the most part in gold, the edges of the skirt and jacket usually have a gold trim also. The traditional bridal crown has beading and fabric balls on top, it's very ornate is often one of the most expensive pieces of the outfit.

Posted by Unknown at 4:48 AM No comments: 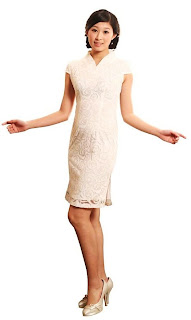 Lace Cheongsam - Qipao
In 1920's, Cheongsam was underwent the change with the influence of Beijing style and Western style. The modern version which slender, formed fitting with high cut of Cheongsam was first developed at Shanghai. The cuff of the Qipao changed to become narrower and trimmed with lace. Moreover, the length of Cheongsam was shorter and it showed the beauty of female body shape to be fully displayed. The Cheongsam was under the transformed from old Qipao style to suit the modernized style of dress and it continue became more popular among the Chinese women at the whole China.

In the 1930s and 1940s, Cheongsam designed in various styles and with variety of fabrics. The design style of Cheongsam changed to high-necked collar or even no collars, sleeveless design, short or medium sleeve and bell-like sleeves. These new design was changed the original basic Qipao style and was popular become a dress for high level society.

The everlasting of elegant Cheongsam are the main reason that helping the growth of Oriental Cheongsam. The variety and unique designs of Cheongsam turned into vogue now. Many of the Western designers also will include the elements of Cheongsam into their designs. You may search from online boutique to discover the latest designs and different variety design of collar, sleeves, length, slits, colours and materials.

Some of the online fashion store will provide the customized service but of course the price will be must higher with the ready stock online boutique. The most important is you need to find a suitable design of Cheongsam to fit right your body.

Posted by Unknown at 6:41 PM No comments:

Plus Size Cheongsam
Being plus sized is not an excuse not to look your best and stand out in any occasion. A lot of full figured women are always anxious about the idea of dressing up in front of a big crowd, them afraid of being ridiculed by their body shape. Gone were the days when size mattered when it comes to fashion. Nowadays, there have been numerous collections and designer outfits that cater to women who have fuller figures. You need not worry about skipping events for fear of having nothing to wear. You can feel confident knowing that there are a lot of plus size cheongsam dresses that can help you look great in any occasion.

When choosing plus size cheongsam dresses, it is first important to determine exactly what type of event you are about to attend to. Once you are certain about the event that you will be going to, you must now focus on the shape of your body. We already know that you are full-figured, but that does not mean that you do not have a specific body shape. Bear in mind that when choosing the cheongsam dress, you must always go for something that will make you feel both stylish and comfortable. Make sure that regardless of your size, you will feel comfortable in what you wear.

Posted by Unknown at 3:40 AM No comments: 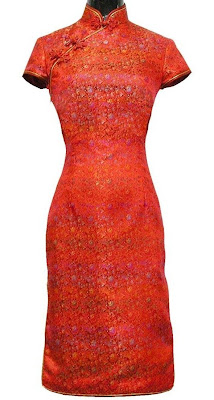 Custom Cheongsam
The ancient Chinese people had very distinctive social classes. Each of these has specific styles and significance of dressing. Varied symbols are used on the clothing to distinguish between various strata of society. The ancient Chinese like cheongsam clothing has varied greatly throughout different periods of time. Each social or historical period brought about a new style.

The Cheongsam now is worn only at special occasions which are mostly historical reenactment, hobby, coming of rite of passage ceremonies, ceremonial clothing worn by religious priests, or cultural exercise. However, there are attempts on to try and make it a part of more day to day wear or at least during Chinese celebrations and festivals especially in China as well as among the non resident community. 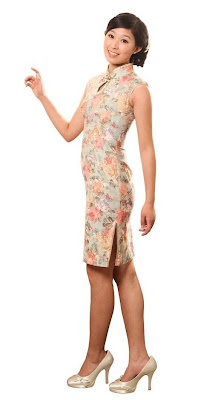 This way, you will know you can truly enjoy your day. Short cheongsam dresses are not necessarily for everyone. However, they are available in exciting styles and colors. They have a unique look that you will not find in classic styles. In addition, they are definitely in keeping with the current trends.

Posted by Unknown at 6:50 AM No comments: